The girl’s shadow was born during that winter 8 years ago.

The girl experienced the frailty of life for the first time, on that quiet, solemn morning. 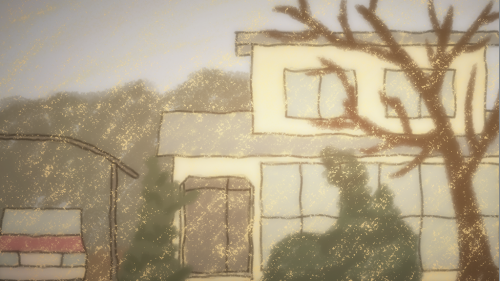 Her family’s house was on a mountainside, surrounded by an empty wilderness.

She wasn’t allowed things such as a friend that lived next door, to go to school with, to play with. Such things were considered unnecessary.

But it was a house with a beautiful view of the waters and stars, a house that offered great peace of mind despite such small complaints.

However this was only the story during summer. The mountain winter was blisteringly cold, and mornings were especially bad.

Her father drove her to the station every morning, but the car’s windows were always covered in frost, and it took a the better part of an hour before the engine warmed up.

While her father enjoyed his morning coffee, it was the girl’s duty to go outside and start the engine.

Leaving the entryway, the girl crossed the yard, her breath white with the cold. She opened the door to the antique sedan.

As always, she inserted the key and turned it, and the engine purred to life.

She had done this dozens of times, and she was proud of her work.

There was a high pitched squeak.

It wasn’t a person’s voice she heard, but a small, very small, cry of pain.

Her father opened the hood of the car, and there was a single living thing inside. 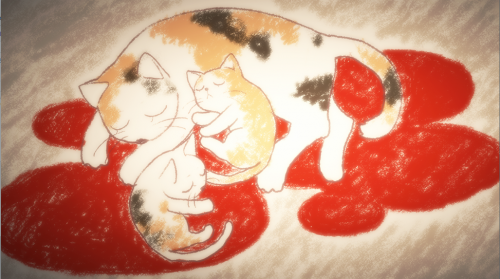 Squeezed inside amongst the monstrous engine and creaky belts, a mother cat and the shape of two kittens stuck out like a sore thumb.

Three cats in the engine, gathered into a ball.

There was nothing above the neck on the mother cat, and one of the kittens was coiled in the mechanism of the engine, unmoving. It was probably instant death.

The remaining kitten had half of it’s face dyed a deep red, its fur mangy like a wet dog, but it was still breathing.

The kitten was nestled up against the corpse, no, the piece of meat that had been its mother. For what may be the last few minutes of its life, the kitten earnestly, eagerly, clung to its mother’s chest.

My father’s voice was mournful.

The previous night was even more intensely cold than usual. After her father returned home from the station, the warmth of the engine must have seemed like an invitation to the family of cats, as they sought shelter together under the car’s hood.

They meant to pass the night in the engine compartment, but the next morning, were awoken by the spinning of the drive belt. The air-tightness of the meager 80’s car seemed to have its own story (not sure about this translation).

“It’ll be okay. Nothing bad will happen.”

Her father’s voice was distant.

The kitten’s mangy grey fur was drenched with its mother’s and sibling’s blood,

—Aa, it’s round skull was visible.—

as well as its own.

It wouldn’t be long until the kitten closed its eyes for the last time. Shivering, it buried itself in its feverently dead mother’s chest.

The girl, cradling the kitten in her arms, ran to her grandfather’s dwelling, deep in the mountains.

Trembling with remorse, the girl didn’t understand any of the sad chaos.

Holding back her tears as best as she could, she flew to her grandfather’s workshop.

Her grandfather was a sorcerer who could do anything.

She, herself, had never witnessed what you could call “magic”, everyone knew it was a thing of fairy-tales, that went against all reason. But it was known that her grandfather was definitely a being who could do things that defy reason.

She thought her grandfather could definitely help her. 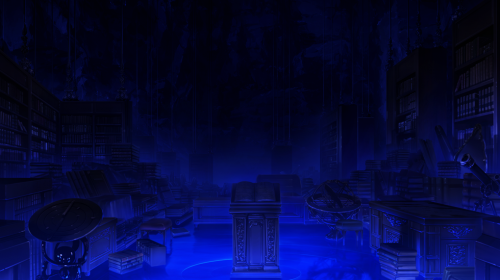 “You say you want to change this kitten’s fate?” said the cave-dwelling magician, in a disinterested voice.

The girl repeated that she wanted to save it.

Magic is easy to misuse.

It goes without saying that it is a thing that can drastically alter the world.

Like a machine, the girl’s selfish wish was granted.

The next thing the girl knew, in her hands was a tiny corpse.

The last warmth of its life had already disappeared.

The tears she had tried so hard to hold back welled up and began to flow from her eyes.

In her chest, an overpowering sense of regret began to form, like an empty, grey, void.

“It was futile after all. In the end, everything returns to nothing.”

What had happened, the girl was unable to understand.

In the span of those 10 empty minutes, what she experienced, who she met, what she learned recklessly came back to her.

It is a fact, that those that are dead are beyond our reach.

“Ummmm….. Is there somebody in there?”

I was born from that girl’s mistakes.

At any rate, everything lost and longed for is waiting.

That is the reality stemming from that fairy-tale 8 years ago.

The day of those girls’ first meeting, and the magic that was used that could not be taken back.

Arrogant and greedy, incompetent at everything but destruction. I am surely a wolf.

Without looking back, or looking forward, without recognition and puffing my chest with pride. My condolences if I were to become alone.

In the end, my fate is to be cast out by Little Red Riding Hood.

It was a quiet morning.

From her bed, she peeked out at the sky, like a canvas daubed and smeared with various shades of grey

The thermometer looks to read about 6 degrees, which is unforgiveable even for November.

Breakfast-time had already long passed, and she was awakened by pangs of hunger.

Being able to lounge around in bed like this made this morning a joyous occasion for her.

The clock had circled past 8 a.m. a long time ago.

If this was an ordinary weekday, this would have been a hopeless situation, as she would have to struggle against the clock to avoid being late, but today was an anniversary of sorts, a school holiday.

It has been a long time since she’s been able to lazily pass away the morning.

Again, she looked out at the sky, such a steely blue that it made almost made her think it was dusk.

It wasn’t what you would call a “good” morning.

But for the girl who didn’t get to sleep until 3 hours ago, the weather outside was as good as any.

Now she was drowsier than ever.

If she could doze of in bed it would be a good morning. Whatever happens on the other side of the window was not her concern.

She shut the curtains.

Again she closed her eyes, and tried hard to quickly go back to sleep.

“…..It seems I was at least able to sleep for about 2 hours”

Luckily she was still plenty drowsy,

And she almost drifted into unconsciousness.

Her meager wish was hopelessly crushed.

A small, high pitched ringing in her ears.

It was definitely the phone ringing.

It was just her luck.

Her eyes that she had just closed, snapped open.

“Aaaagh, just when this day couldn’t get any better….”

The phone was in the first floor lobby.

From this room, it was a 10 meter walk and one flight of stairs away.

For the sleepless girl, this distance seemed overwhelming.

…..The ring of the phone was persistently echoing.